Ms. Ito's life from May 13, 2015, when the email battle with Mr. Yamaguchi was over, to October 2015, right before she meets Nicholas Almark. The sources are colored as followed:
Her book "Black Box"➡
Posts on social media➡
Court documents➡
My comments will be indicated by 💡. actions of Ms. Ito by 🔴, and actions of Mr. Yamaguchi by 🔵.

May 13: She heard from investigator A that the taxi driver testified.
Around the same time, she was made to reenact the incident at Takanawa Police as part of an investigation.

Mid-May: The investigation was not getting any progress.

May 20: 🔴She was diagnosed with PTSD at the Machidori Psychiatric Clinic.
The medical record says, "They had sex at about five o'clock, but she doesn't remember it."

May 29: 🔴She asked permission to use photos of the eruption in Kuchinoerabu Island for Reuters. 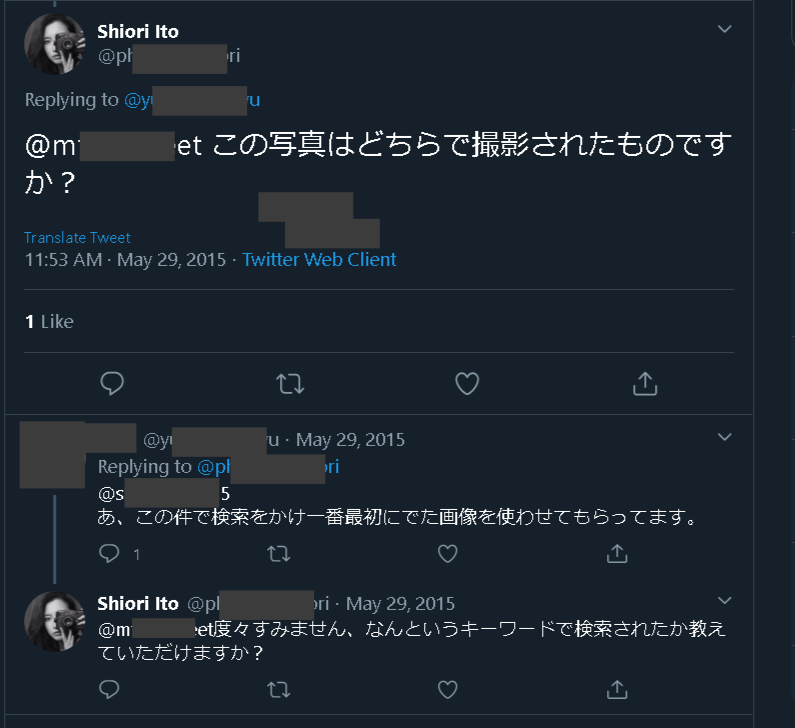 👆Ms. Ito: Where did you take this picture?
Reply: It's the first image that came out when I searched about it.
Ms. Ito: Thank you. Can you tell me what keyword you entered to search for? 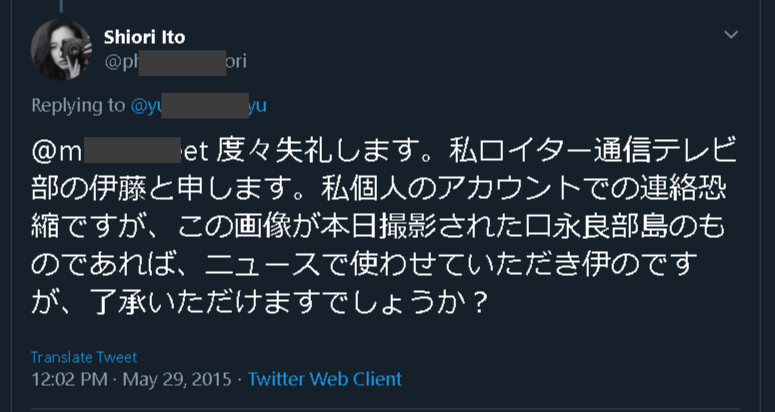 👆Sorry to bother you often. I'm Ito from the Reuters TV department. This is my personal account but if this is the image of Kuchierabu Island taken today, we'd like to use it on the news. Could you approve?

May 30-31: 🔴News reporting with a coworker at Reuters , Megumi Lim 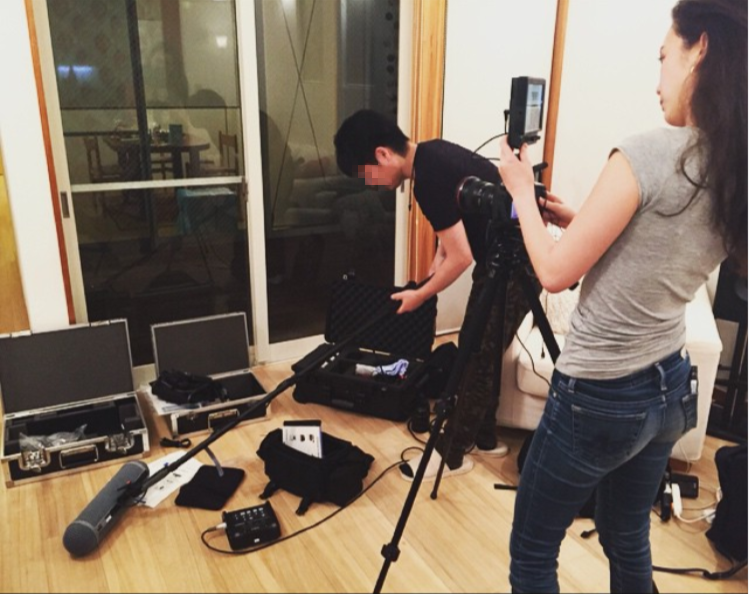 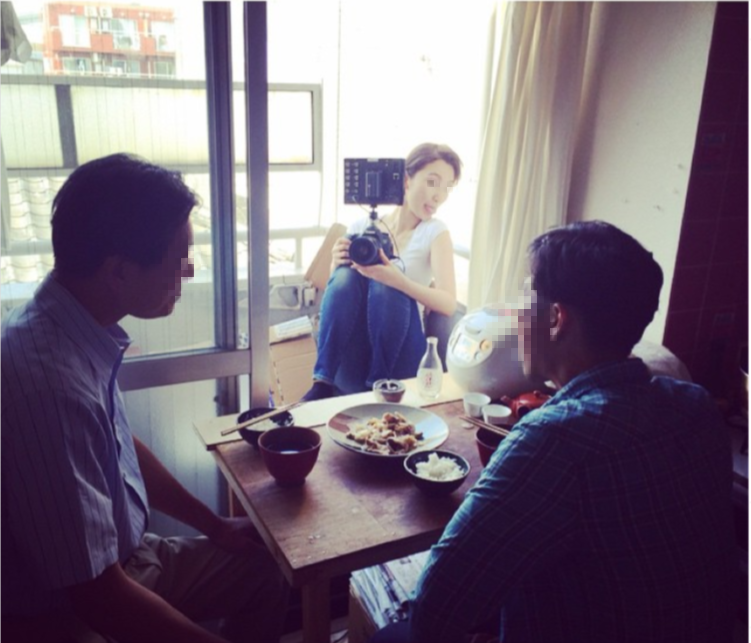 👆She's dressing lightly even though it's only the end of May. Was her PTSD okay in front of men of Mr. Yamaguchi's age?

💡With no progress in the investigation, she received a medical certificate of PTSD from psychiatric medicine, then got back to work at the end of May. There are her other posts on Twitter asking for permission to use photos of the eruption. I can see that she's very pushy from those tweets, which is probably good for being a journalist.

Somewhere between Jun 01-03: 🔴She left for Berlin for work.
Before she left, a friend of hers gave her a book titled "The murderer is right there" written by a journalist, Kiyoshi Shimizu.

Jun 04: Investigator A called her to announce that they would arrest Mr. Yamaguchi at the airport on the 8th. She was asked to return to Japan.

Jun 08: Mr. A called to say that the arrest had been suspended. He also said another investigator would be in change.
She called the office of the prosecutor in charge, Mr. M, and a person who answered said Mr. M was not in charge anymore. She stands in the kitchen, where the western sun shines in hard.

Around Jun 09-11: 🔴She went to Israel to visit a friend she had met in New York.

She got a call from the police investigator Mr. A's boss and was told that the Metropolitan Police Department's investigation division would be in charge of the case. She called her former-prosecutor uncle and was advised to find the arrest warrant.

Around Jun 15-19: 🔴Before returning to Japan, she made a trip to Paris with a friend. 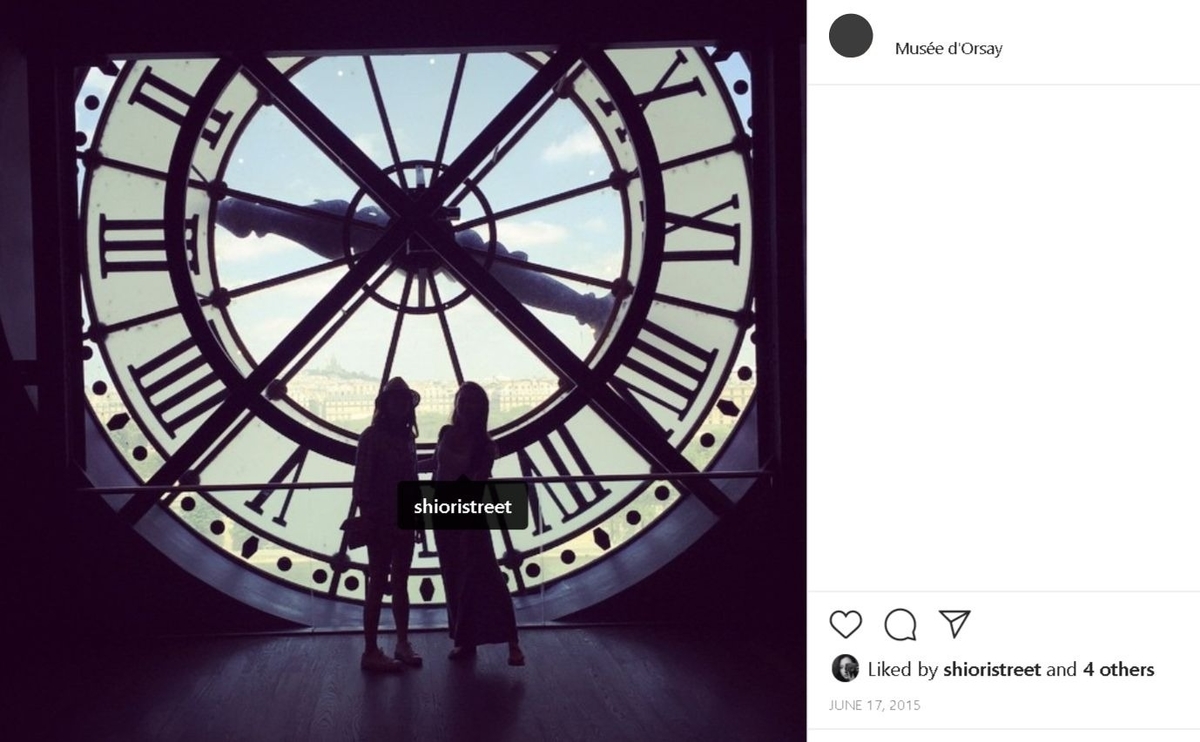 After returned to Japan: At the Metropolitan Police Department, she met with new investigators and heard their explanations that Mr. Yamaguchi had a social status and didn't need to be arrested because he was not likely to escape. She was encouraged to make a private settlement.

Jun 22: Mr. Yamaguchi's DNA was detected on Ms. Ito's bra. They searched his house and confiscated his computer and tablet. Yamaguchi passed the polygraph exam.

💡Her book mentions briefly that there was no reaction to the polygraph exam, but the police's polygraph is not forced, it's voluntary. You can reject it if you don't want to be tested on a lie detector. Nonetheless, Mr. Yamaguchi did it and passed.

Although polygraph is generally thought to be unreliable, Wataru Zaitsu of the Criminal Department's Scientific Investigation Laboratory at Toyama Prefectural Police Headquarters says the accuracy of the questionnaire is 86% in sensitivity and 95% in specificity. Mostly, it's about 90% accurate. The American Polygraph Association also says the accuracy rate is above 90 percent when done properly. Here are two videos showing the experiences of those who have been subjected to a police polygraphic examination. Both of them are surprised at high accuracy.

During this time, the dates are not shown in her book, so I'll pick and write the things to seem important in the order of being written in the book.

Meanwhile, she was worried about meeting Mr. Yamaguchi near her work. When she saw a man with a similar appearance, she felt nauseous and panicked. One day, while she was on the phone at work, she suddenly fainted because of stress. She was even more mentally driven into thinking that she might be retaliated by reporting to the police and not be able to work in the same industry.

One day, she got a phone call from an unknown number. It was Mr. A and he said, "I wanted to tell you that it's not that I screwed up." She asked Mr. A a lot about the arrest warrant. Mr. A encouraged Ms. Ito and said, "You should ask the Metropolitan Police Department why the arrest warrant was not executed." It made her decide to confront the huge organization.

She tried to find a lawyer by herself and called the telephone counseling service of the Tokyo Three Bar Association and met a lawyer, Yoko Nishihiro. Also, one of her colleagues introduced her to Tomoko Murata, a lawyer specializing in sex crimes. Ms. Nishihiro and Ms. Murata happened to know each other for some time. Ms. Ito went to the Metropolitan Police Department with the two lawyers and asked about the arrest warrant. The police said, "The arrest warrant has already been returned last week. We don't have any plans to file a new application." She received requests for private settlement from Mr. Yamaguchi several times.

Ms. Ito says that just seeing a person with a similar appearance to Mr. Yamaguchi caused her nausea and that stress caused her to faint during the phone call at work. Let's take a look at Ms. Ito's daily life on social media during that period.

Jul 11: 🔴Testing Steadicam with a coworker at Reuters, Megumi. 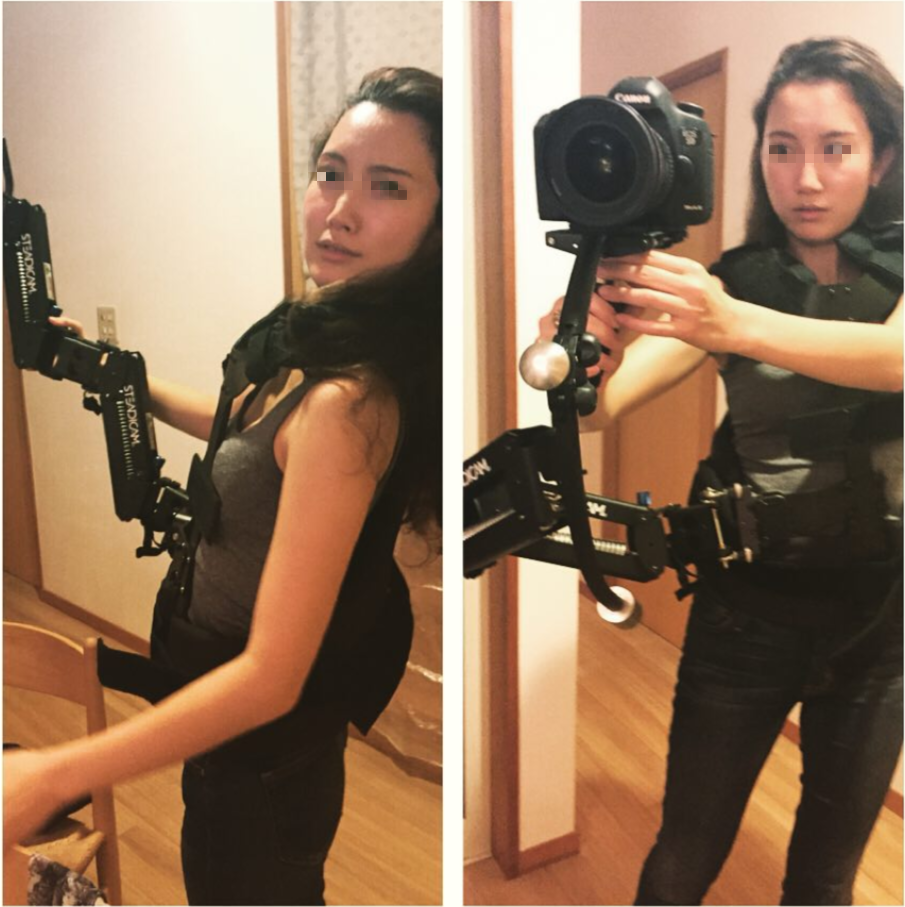 Around Jul 16-17: 🔴Moved from Harajuku to Setagaya

Jul 21: 🔴Covered a story about the Ranch of Hope in Fukushima with Megumi. 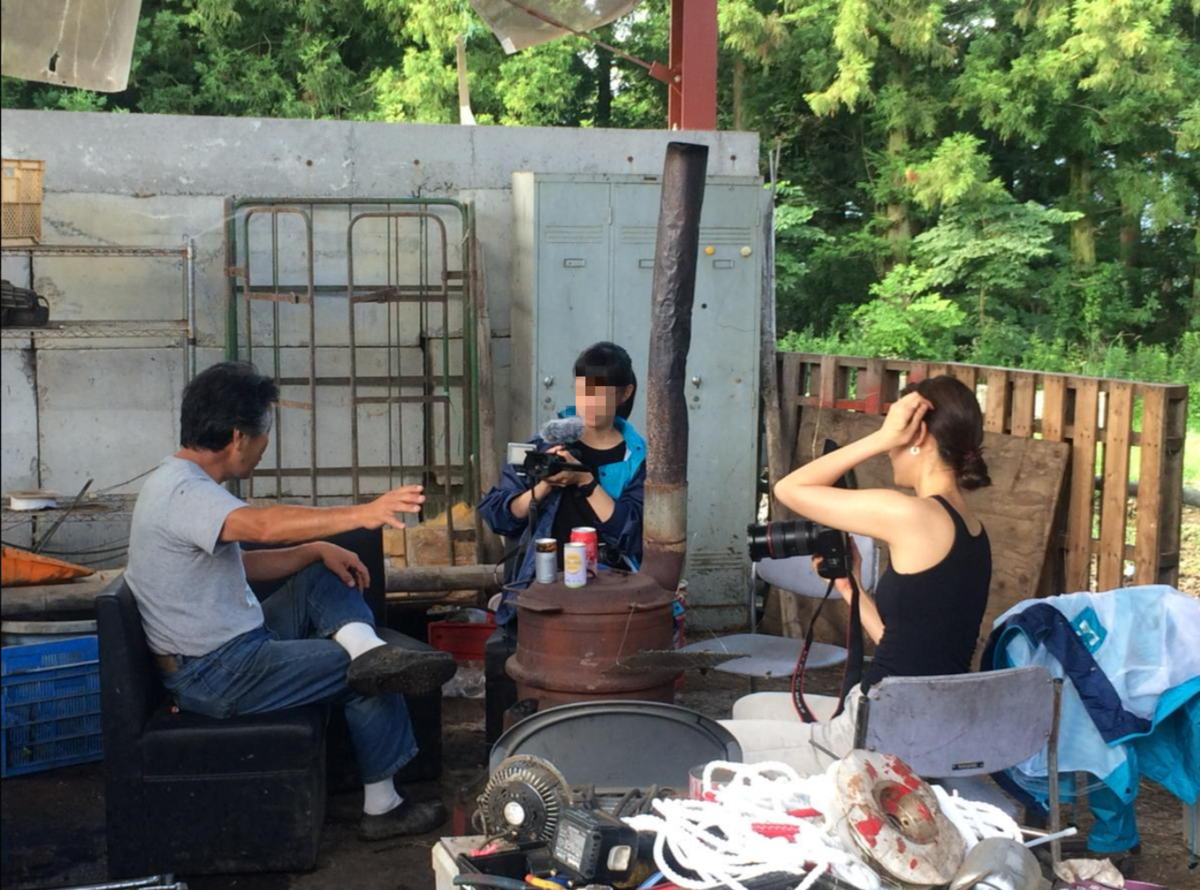 💡Ms. Ito is wearing a tight tank top in front of a man almost the same age as Yamaguchi. I'm sure it was hot outside in the middle of July, but I think its bad manners to wear revealing clothes at work. Megumi is neatly dressed in a jacket. Other people who saw this post were also worried. 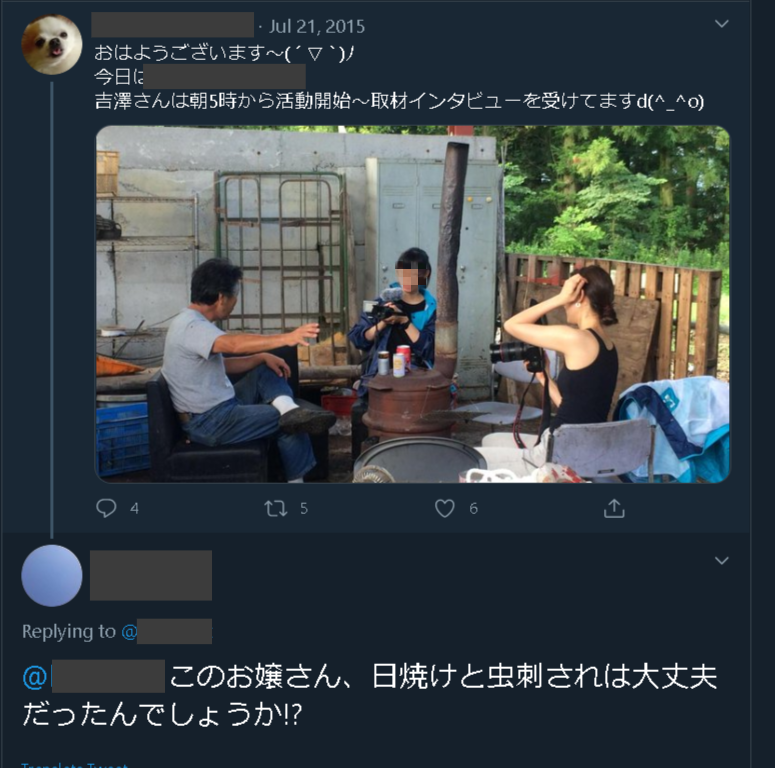 👆Below says: Was this lady OK with sunburn and insect bites?

Jul 24: 🔴Reporting on the former Prime Minister, Mr. Murayama.
To a comment that says, "You're in the middle where you can see it well," she replies, "I have a high femininity that's called a thick skin ;) " 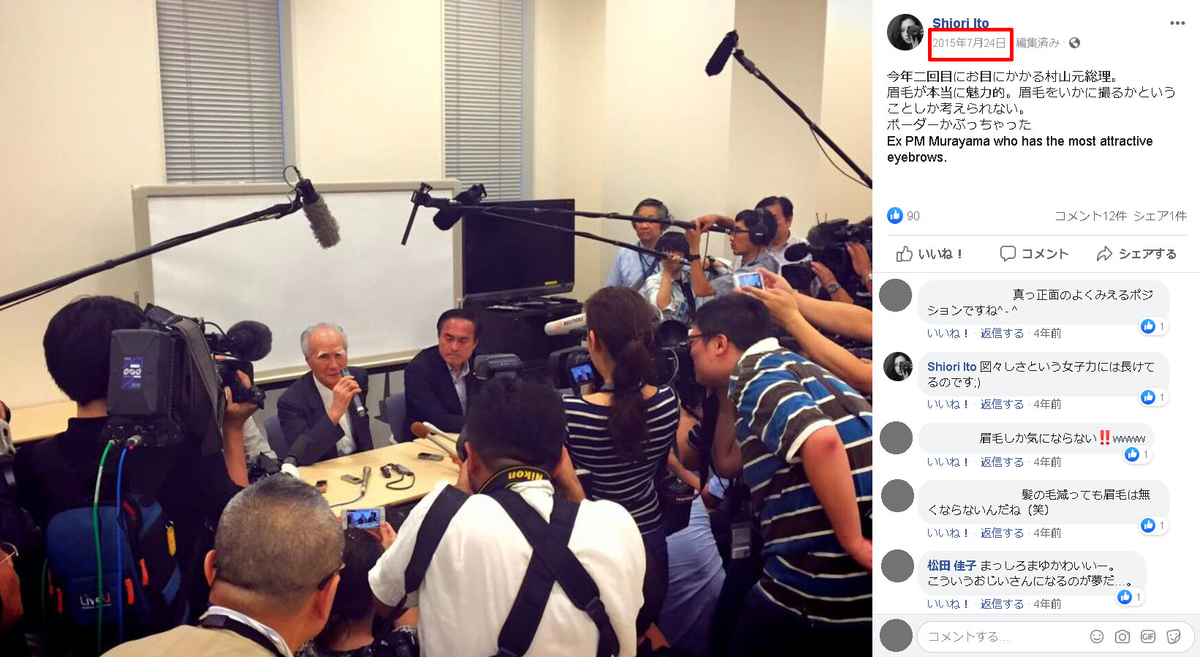 Aug 15: 🔴Covering a story at Yasukuni Shrine, wearing a tight top that exposes her belly. 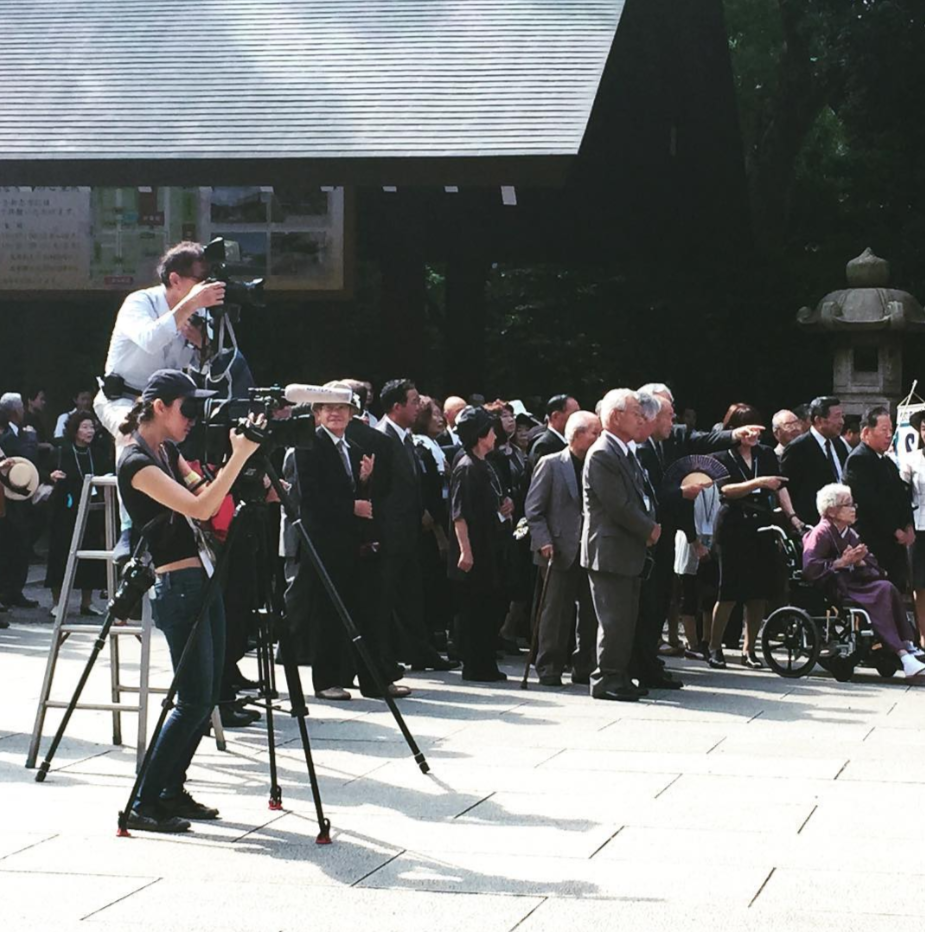 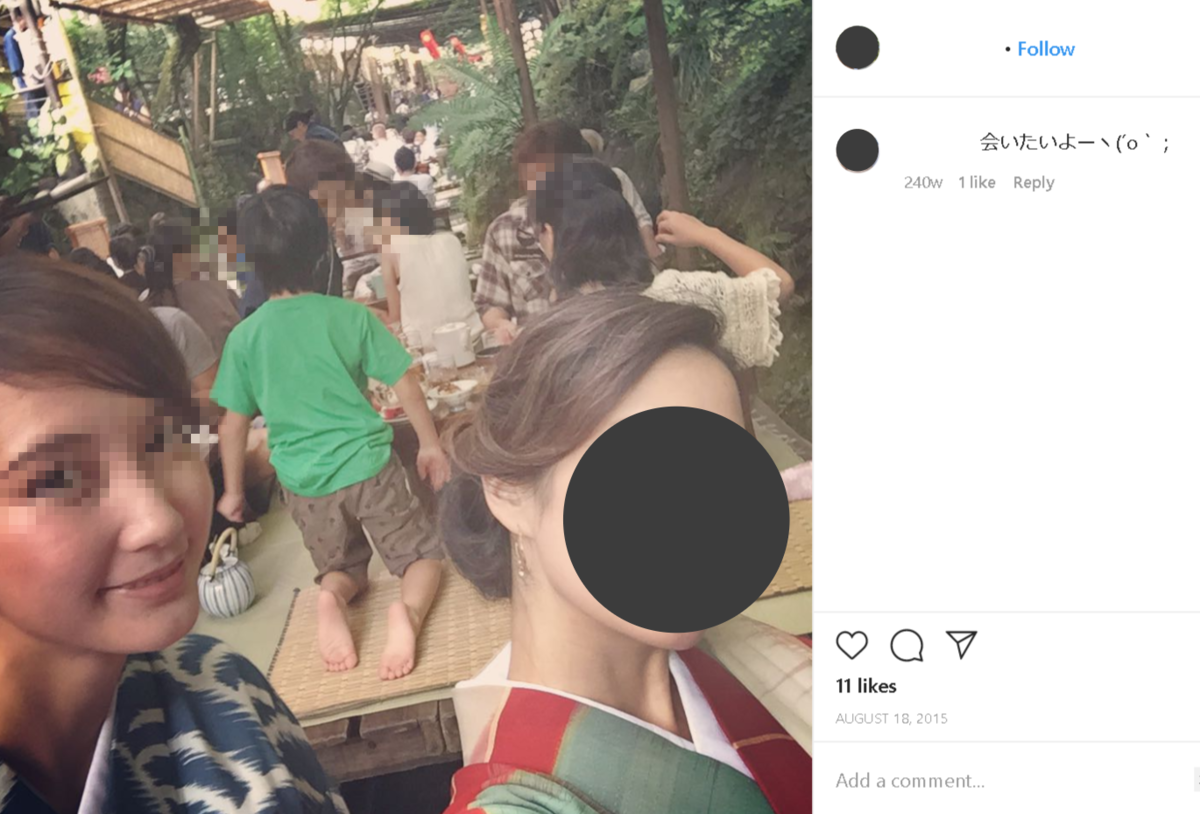 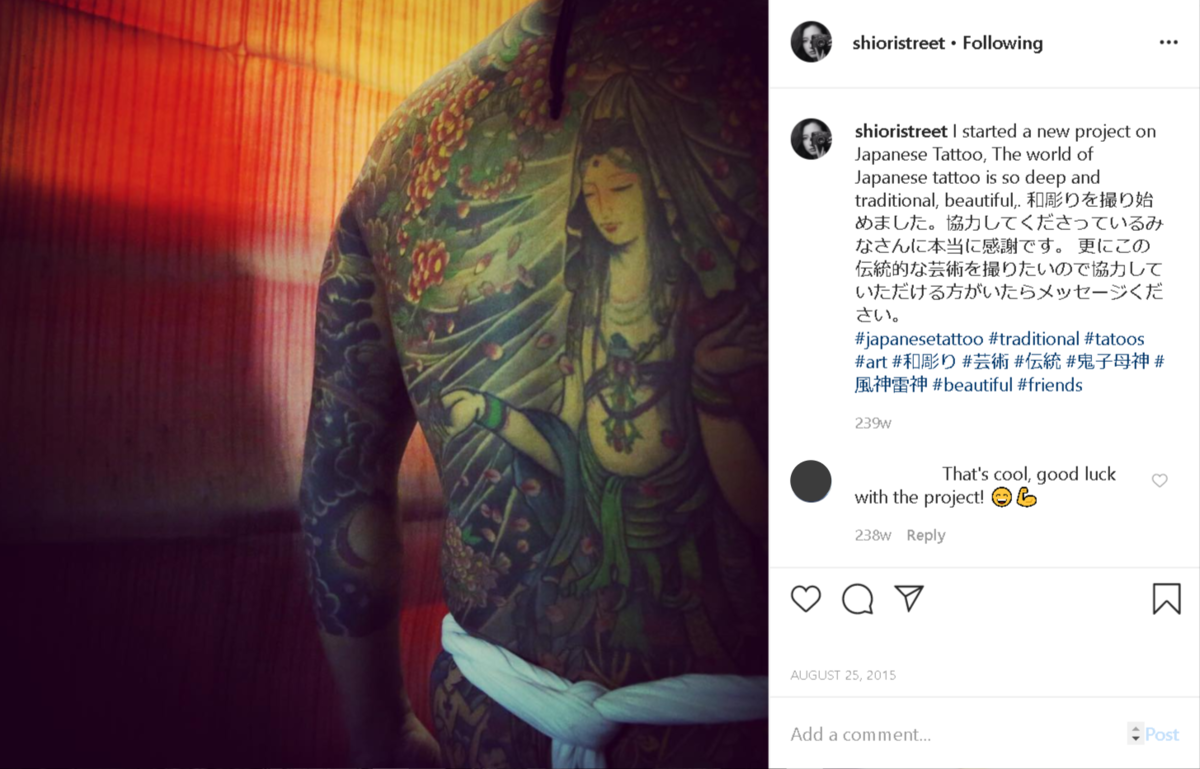 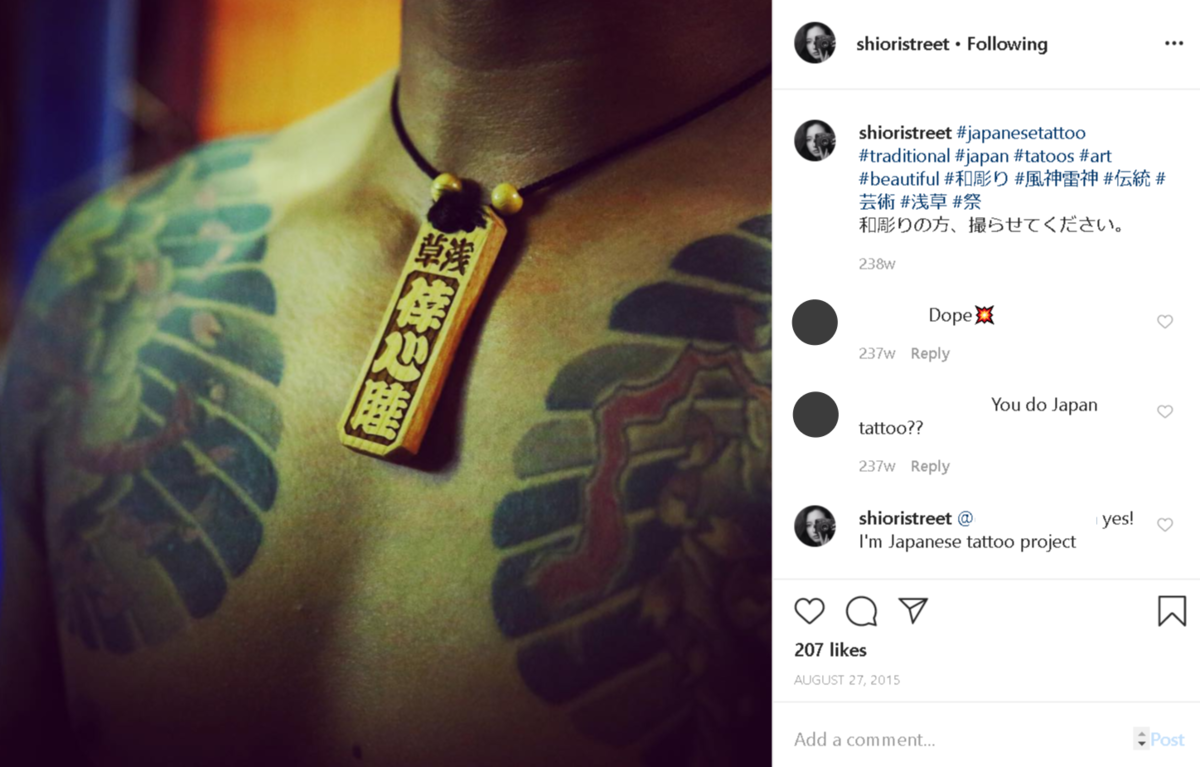 👆"Anyone who would let me take photos of your Japanese tattoos, please give me a message."

💡Although she says in the book, "I felt nauseous and panicked when I saw a person who looked like Mr. Yamaguchi," Ms. Ito's actions seem contradictory. Wearing a tight tank top in front of a man of middle age, exposing her belly in a tight short T-shirt, and showing interest in taking pictures of semi-naked men even though it's for her new project.

Don't get me wrong, I'm not criticizing her for wearing exposed clothes. As I've said before, I also used to like to wear revealing tight clothes. That's why, especially in Japan, I know how much you attract the eyes of people (especially from men) when you wear exposed clothes showing your belly during the day.

To me, Ms. Ito in these pictures does not seem scared of Mr. Yamaguchi's revenge, and does not seem to be in a state of mental deadlock to the point where she loses consciousness while on the phone at work. By the way, she says in an article that at this time she was looking hard for "materials that foreign media may be interested in," so the Japanese tattoo project must have been one of them in consideration of its popularity overseas. But that interest also seemed to wane quickly, no photo was posted after the two above.

🔴Contacted a journalist, Kiyoshi Shimizu. After that, she was interviewed by Nippon TV and met a reporter from the Tokyo Shimbun Newspaper, but the incident never got reported.

Sep 14: 🔴Went to the Ranch of Hope in Fukushima with Megumi. 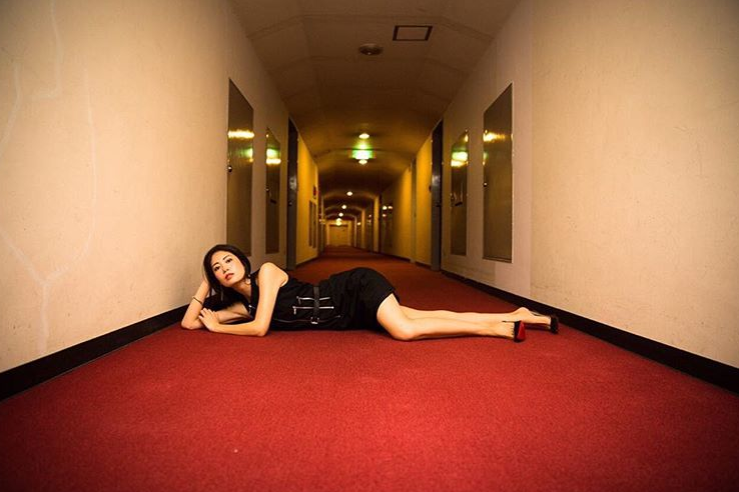 💡On the Internet, there is a false rumor that this woman is Shiori Ito and the photos were taken at the Sheraton Miyako Hotel, where the incident happened. But correctly this was taken by Shiori Ito and the woman is Hikaru Tsuchiya, Ito's friend, and a professional model.

The shooting location is the hallway of the apartment where Ms. Ito had lived at the time of the incident (the address is browsable in court documents, she had already moved to Setagaya at the time of shooting). 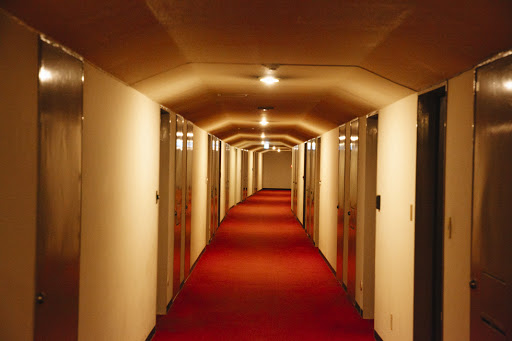 Sep 29: 🔴Posted a photo on social media where she eats dinner with Megumi in her new house
Oct 02: 🔴Covering a story about Japanese public bath with Megumi.

October: She met a new prosecutor in charge, Mr. K.

🔴Prosecutor K explained that the police investigator A's behavior was "unnecessary" and "he shouldn't have leaked" the cancellation of the arrest of Mr. Yamaguchi to Ms. Ito.

🔴Ms. Ito flew to Thailand in early October and started taking a documentary on Rohingya refugees on the border with Myanmar. 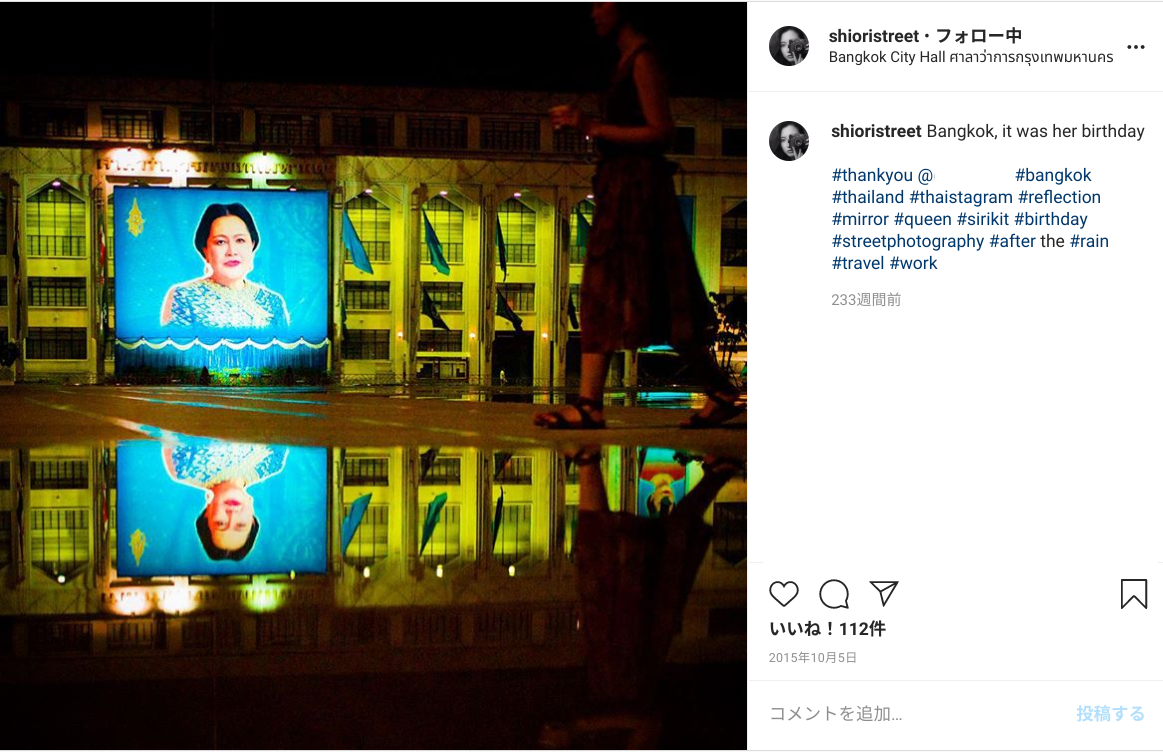 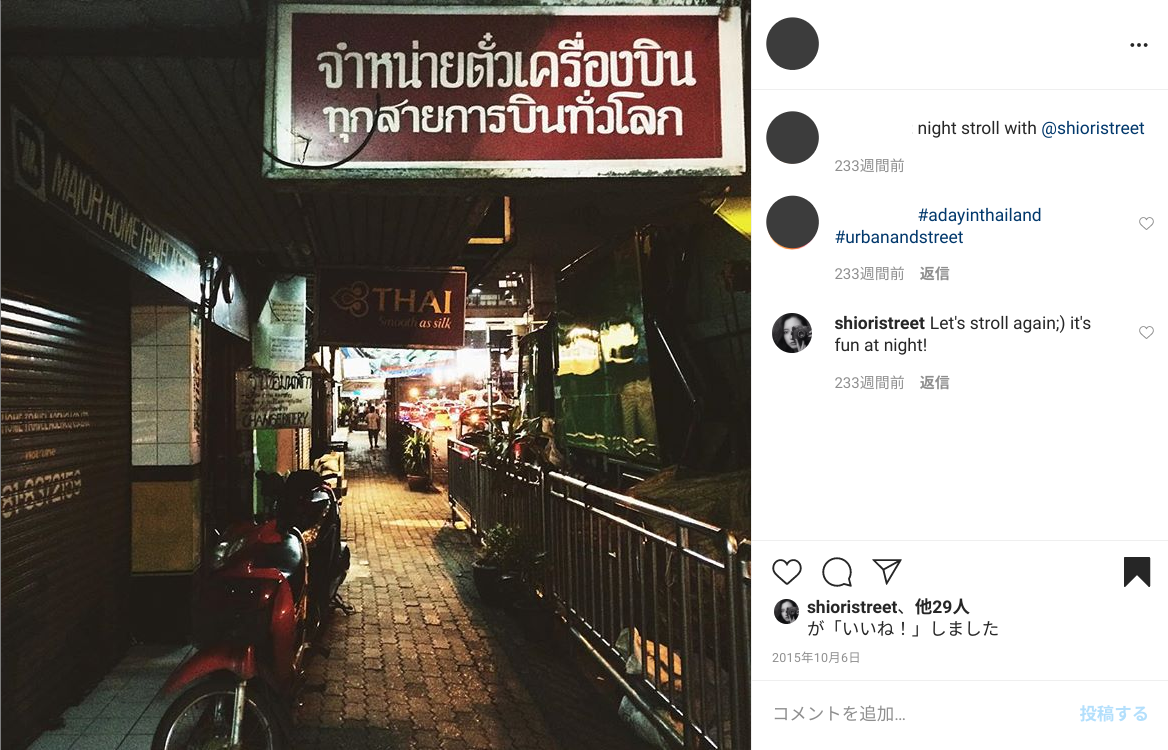 Oct 09-13: She started interviewing on Rohingya refugees in Mae sot. 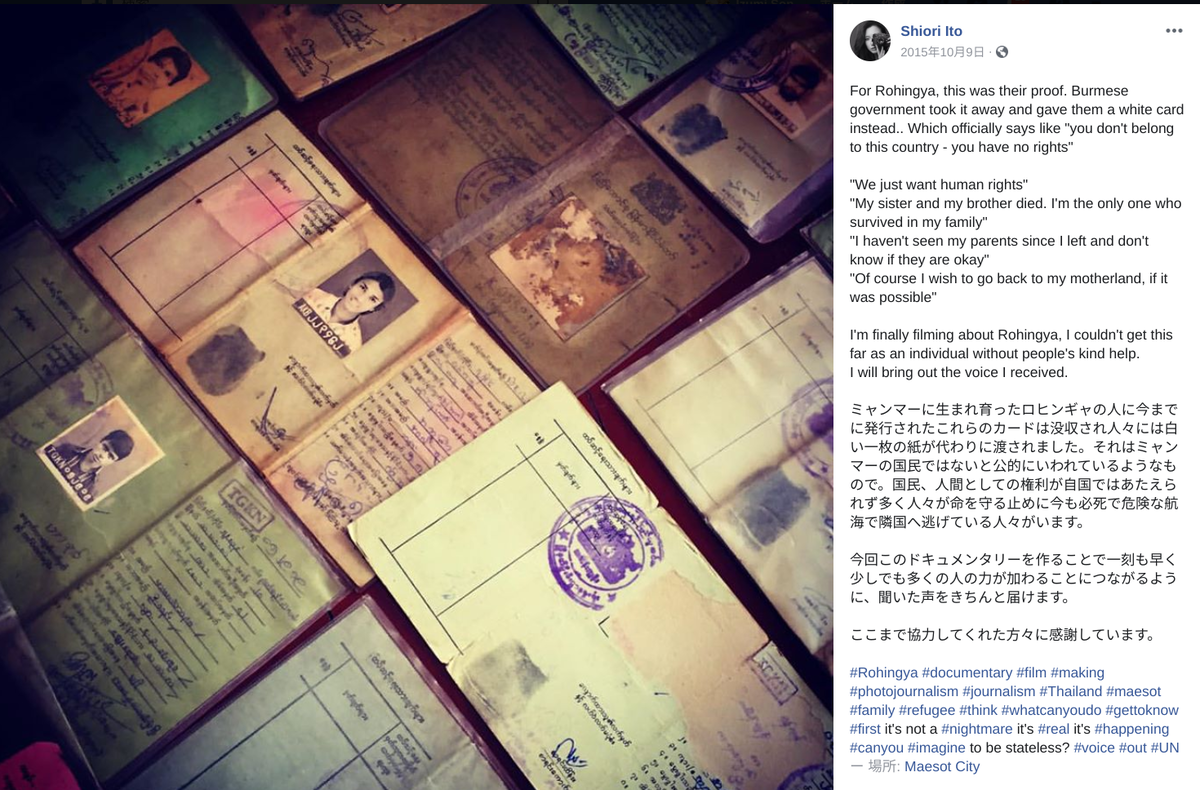 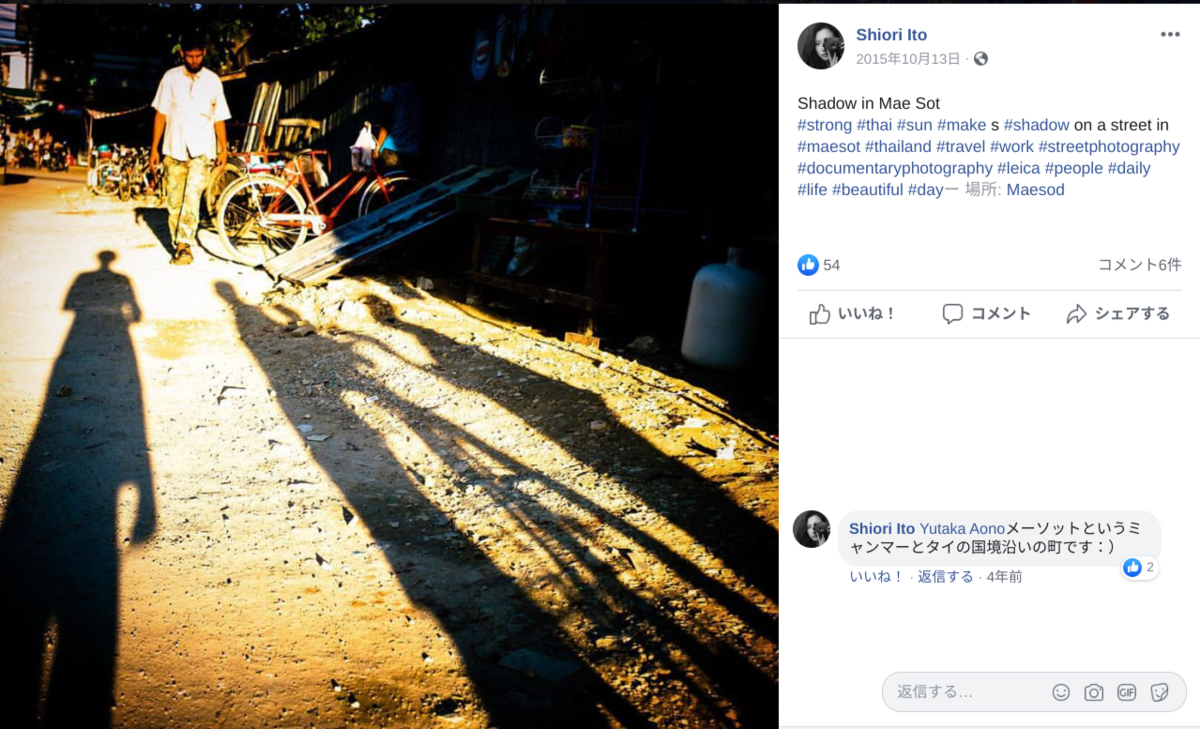 💡In her Facebook post, she says, "I'm finally filming about Rohingya, I couldn't get this far as an individual without people's kind help. I will bring out the voice I received." But it seems that it didn't take shape after all.

Her journalist friend of Reuters who also was covering the Rohingya refugee issue commented on the post: "you in mae sot? coming to yangon anytime soon?" And Ms. Ito answered, "yes, I'm coming to Yangon next month or December! I wish you can help me!!"...But she didn't go to Yangon either in November or December. Why?

Let's look at that in the next post. We will see how the silver award-winning documentary at the New York Festivals was decided to be filmed in 2016.