Ms. Ito and Mr. Yuta Okamura in the second half of 2018 in chronological order. The sources are colored as followed:
Media coverage➡
Posts on social media➡
My comments will be indicated by 💡, actions of Ms. Ito by 🔴, and actions of Mr. Okamura by 💛.

Jul 27: 💛Mr. Okamura posted on social media saying he was able to take photos in Morocco due to flight delay 【Morroco】 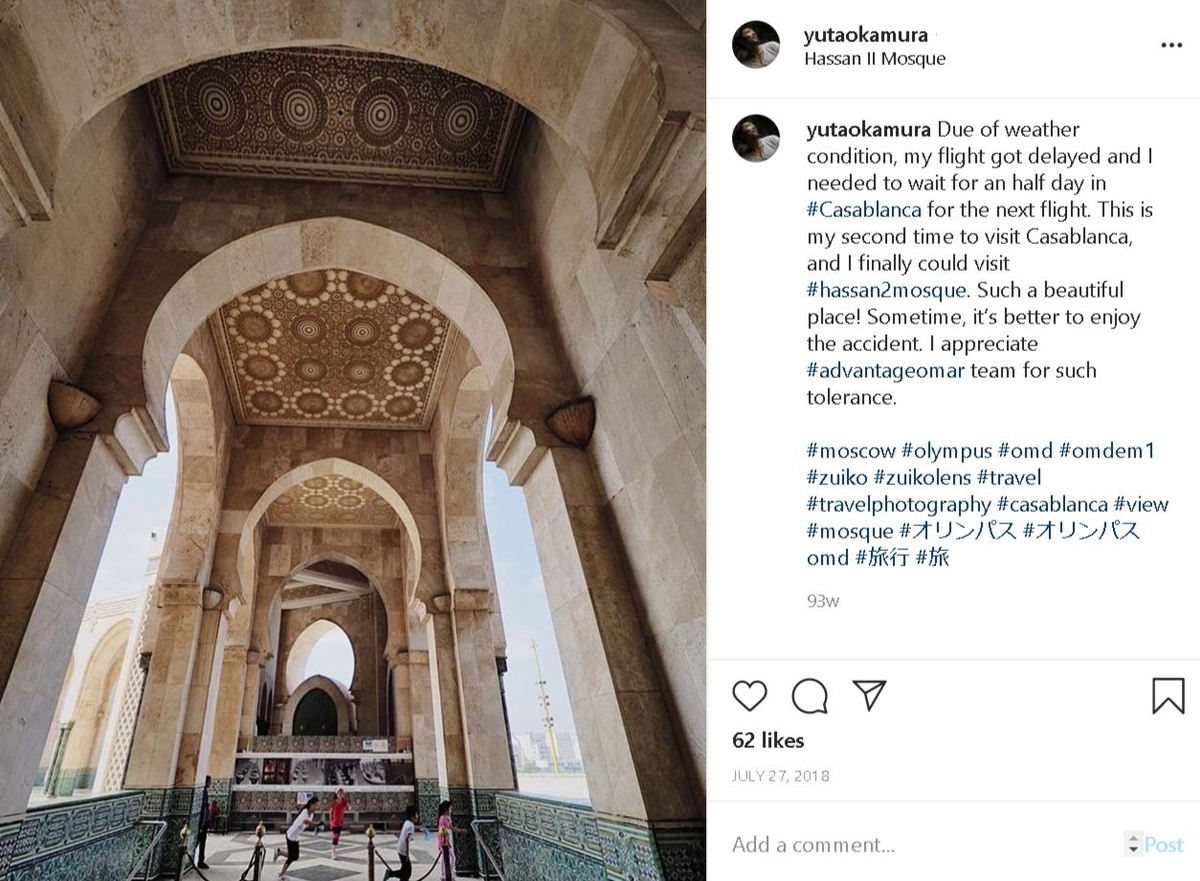 👆Mr. Okamura was in Japan in May. Here, in July, he says he could take photos in Morocco on my way to Washington DC. So the flight was probably from Europe, not from Japan to Washington DC. Perhaps he was staying in London with Ms. Ito. 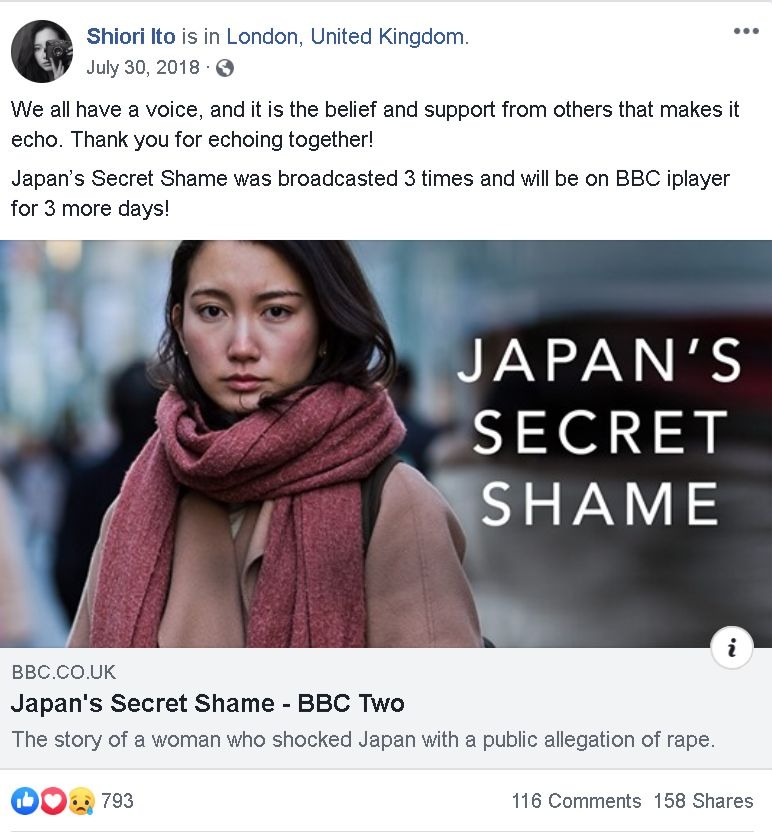 Aug 17: 💛"Advantage Omar" was nominated for Hollyshort Film Festival and they had a screening【LA】 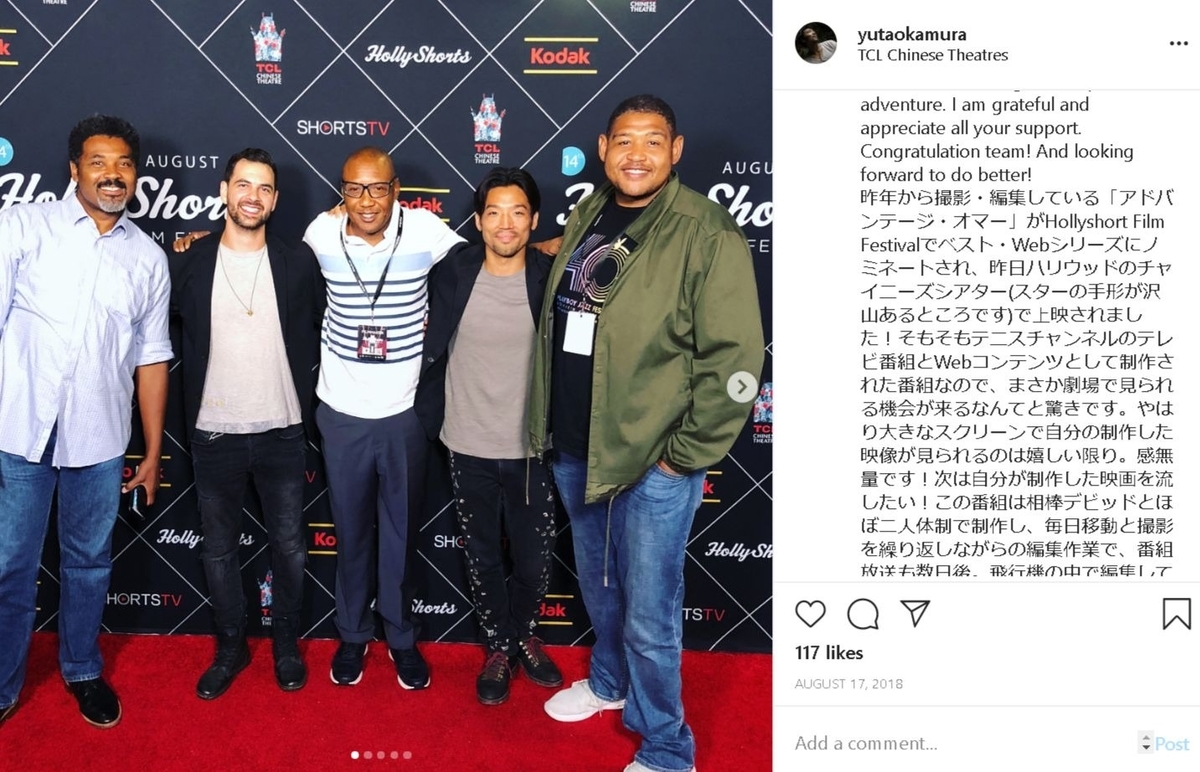 🔴💛Booked Sedona Camp in Arizona on a private lodging site【Arizona】
👇The pictures below are from the host's page. Not the ones of Ms. Ito's stay 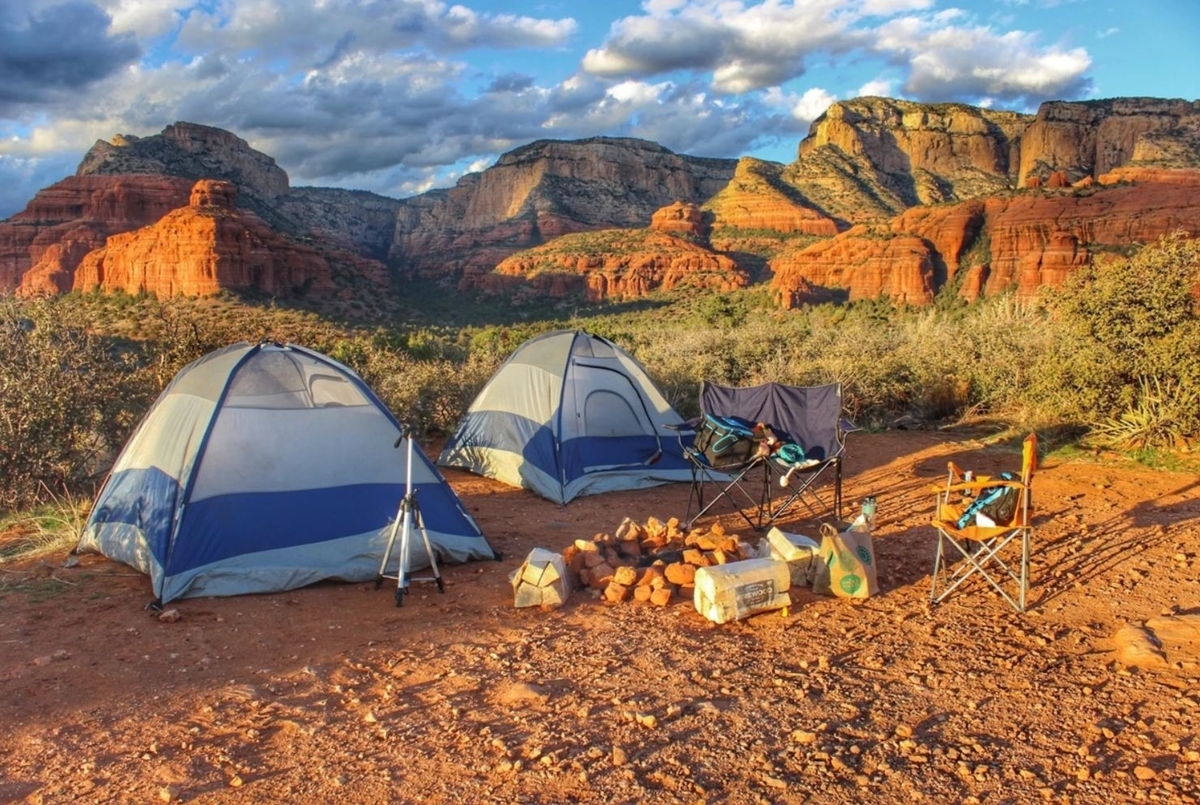 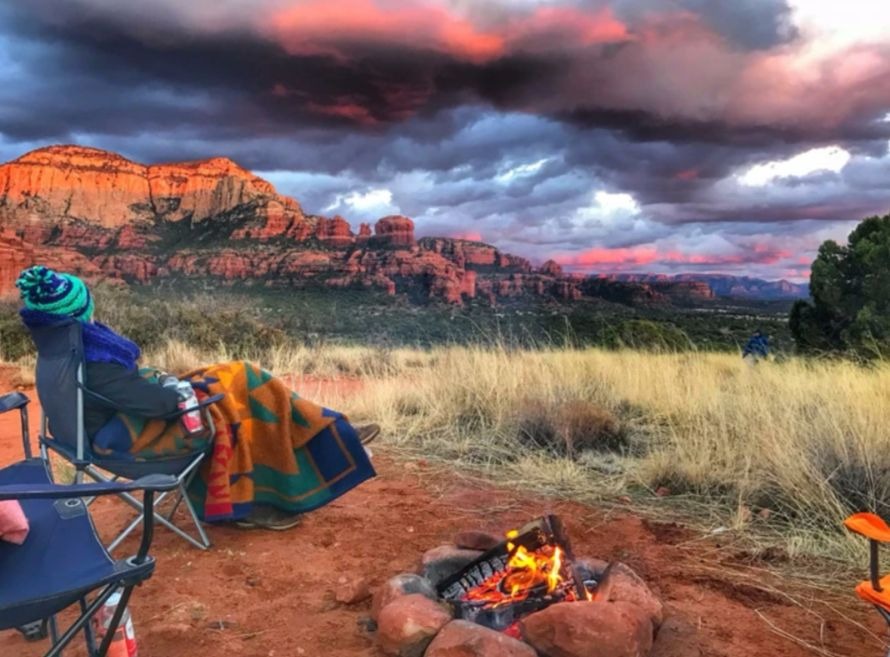 The host's review says "creative filmmakers," "I hope to see their film one day". She probably stayed with Mr. Okamura.

💡At a press conference after the civil trial in December 2019, Ms. Ito described this trip to Arizona as follows.

I didn't know until I became a victim myself, but there are various flashbacks in everyday life. I had a flashback last year when I was hiking in Arizona, USA. It was a huge shock to me that it happened in a place where there were no factors of flashbacks, nothing that could trigger. I thought, "It follows me until here too."

Even when she and her boyfriend, Mr. Okamura, came to such a great nature in Arizona, she was shocked when she had a flashback of the time when she was raped in a hotel in Tokyo. From the review written by Ms. Ito, I can only see that two people had a wonderful time in the great outdoors in Arizona. 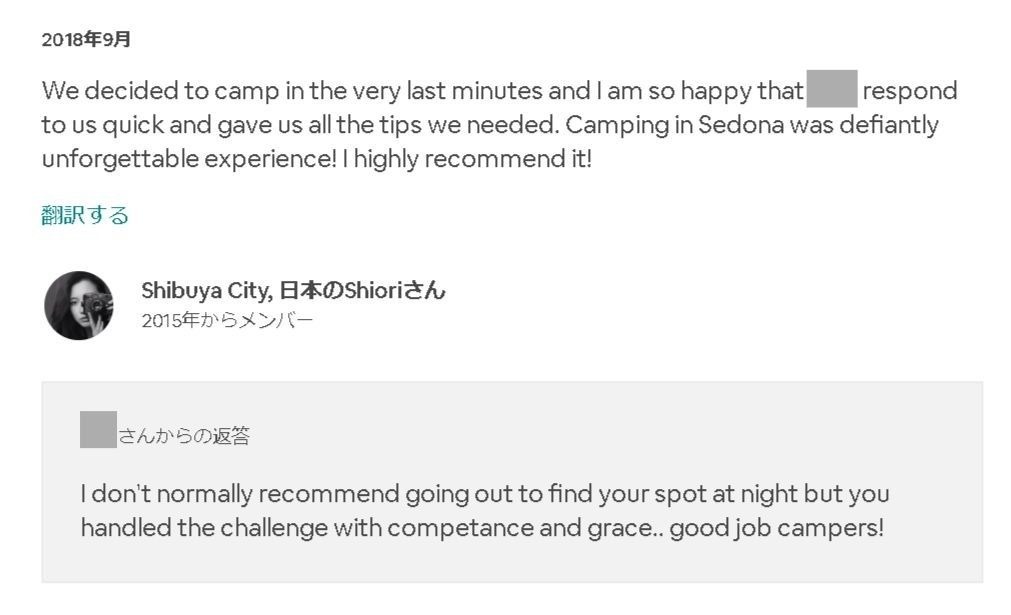 🔴Announced on Facebook that FARC coverage in Colombia in April came out as an article on Yahoo! News（Video production: Yuta Okamura） 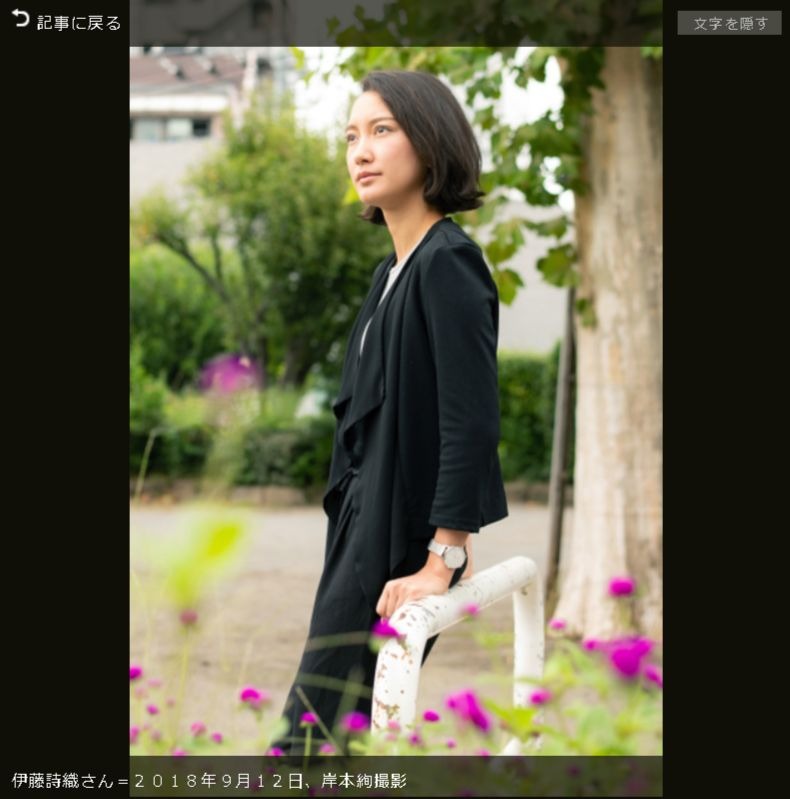 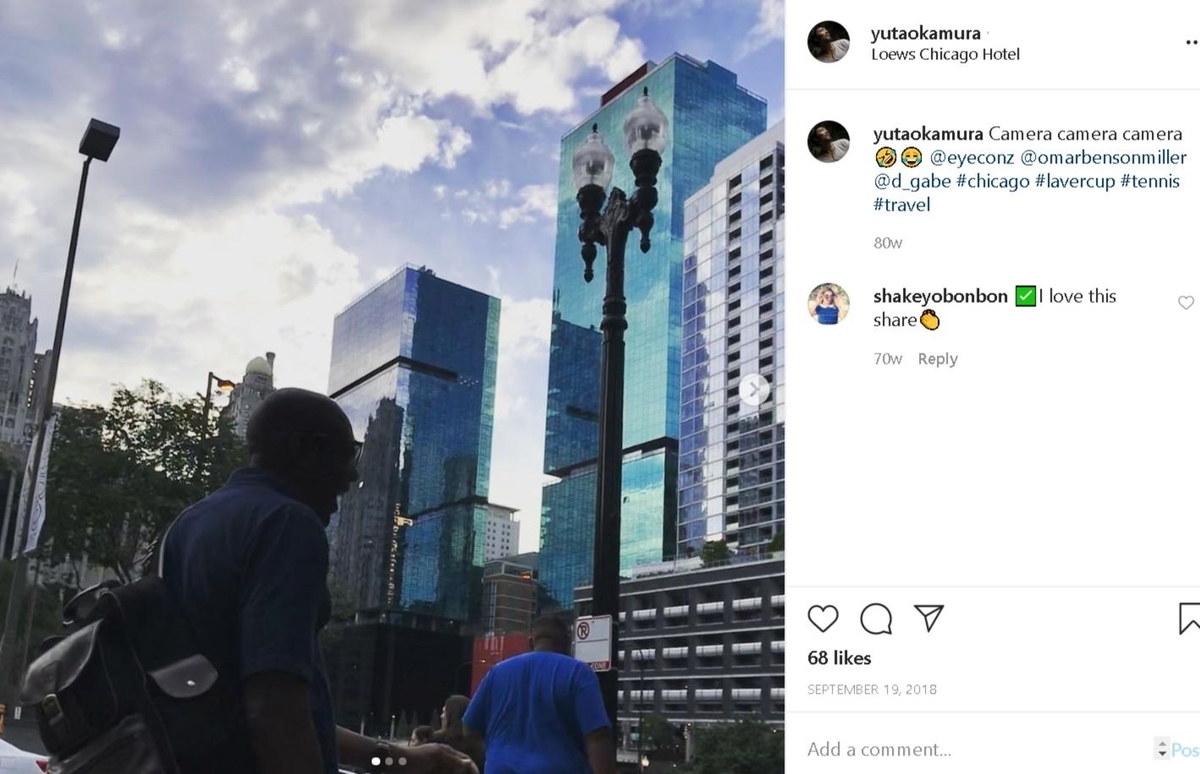 👆All shooting of "Advantage Omar" finished in Chicago

Sep 25: 💛"Advantage Omar" was nominated for the International Academy of Web Television Award and Mr. Okamura attended the award ceremony【LA】 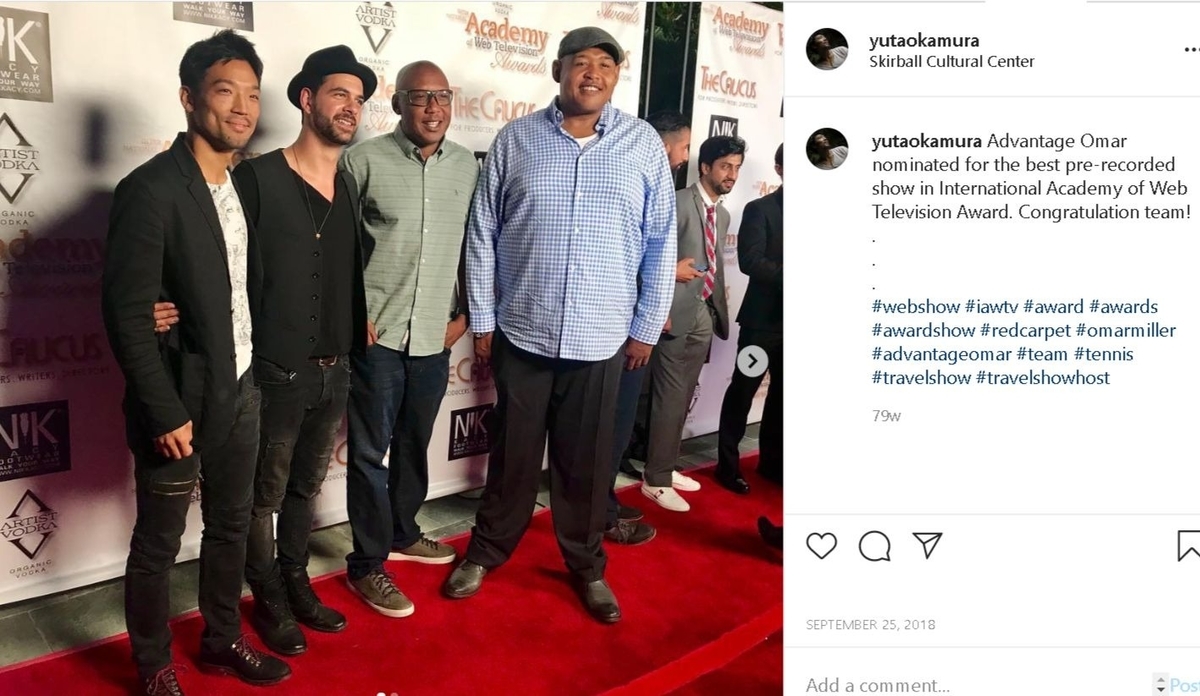 👆Unfortunately only nominated this time too 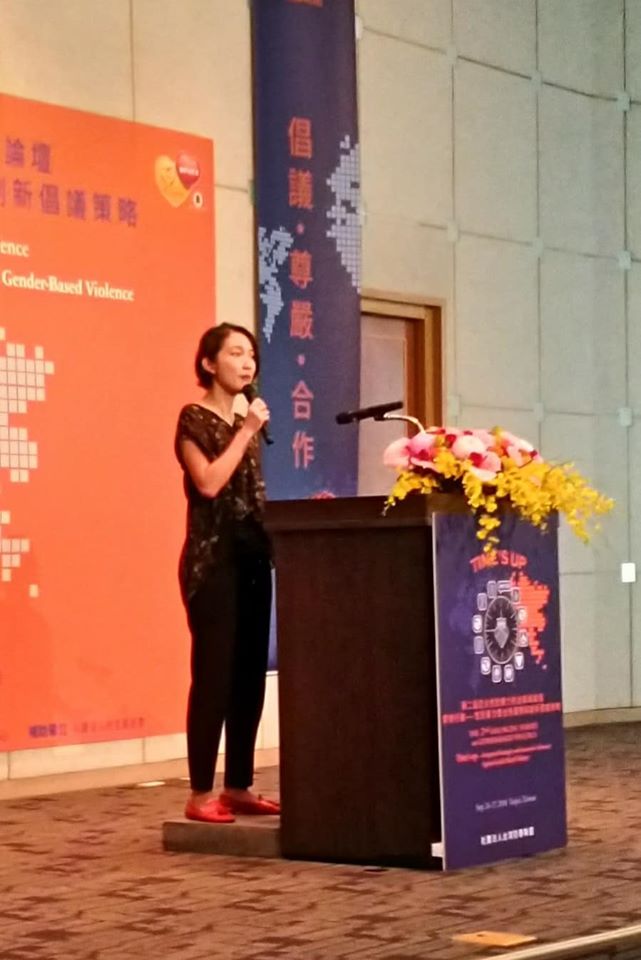 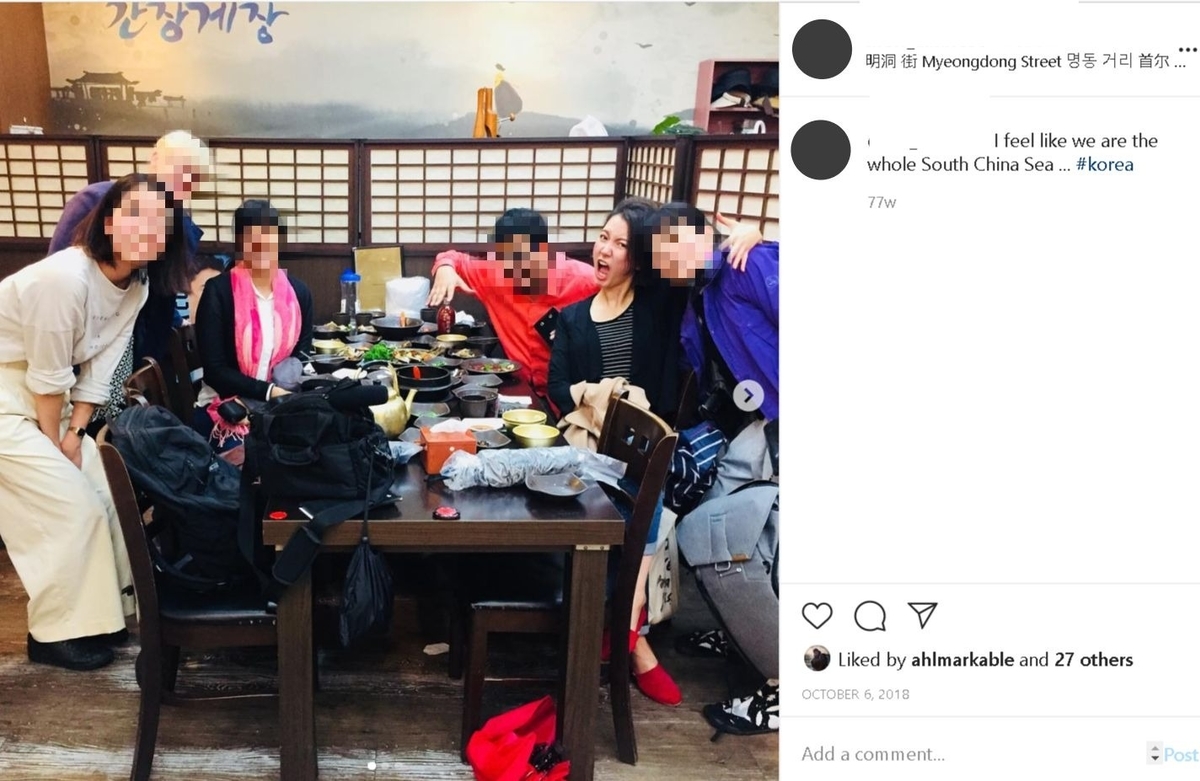 💡Before this day, the president of the Comfort Women Support Group "Seed of Hope Fund", Ms. Yang Jingja, who later launched a support group for Ms. Ito "Open the Black Box" the following year, brought Ms. Ito to "House of Sharing", a nursing home for living comfort women in Seoul. 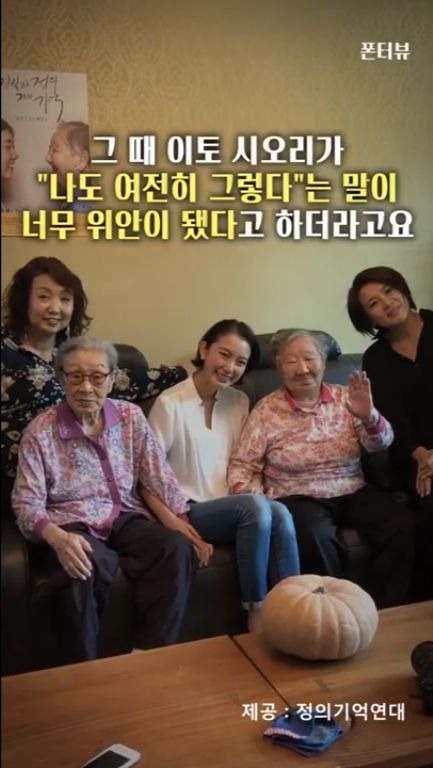 👆From the video of Hankyoreh TV in Korea in December 2019

Oct 12: 🔴Participated in the "Japan Women's Conference" to discuss solutions to issues for the realization of gender equality society【金沢】 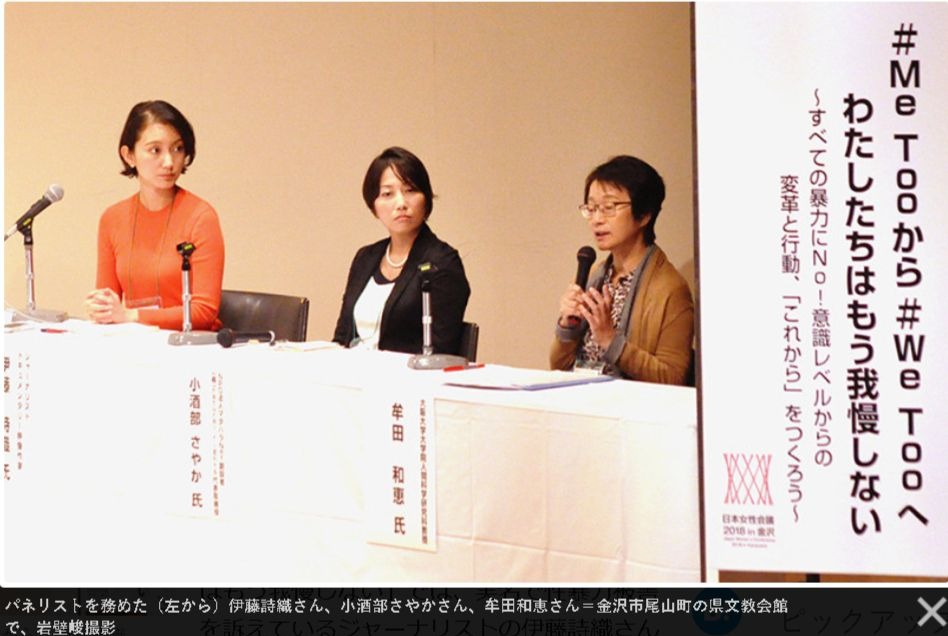 Oct 19: 🔴Announced the appearance on a BBC radio program on Facebook【東京】
💡Ms. Ito says "here in Japan" several times in this radio interview. It seems she participated in it from Tokyo.

Nov 03: 🔴Participated in a #MeToo Symposium【Tokyo】 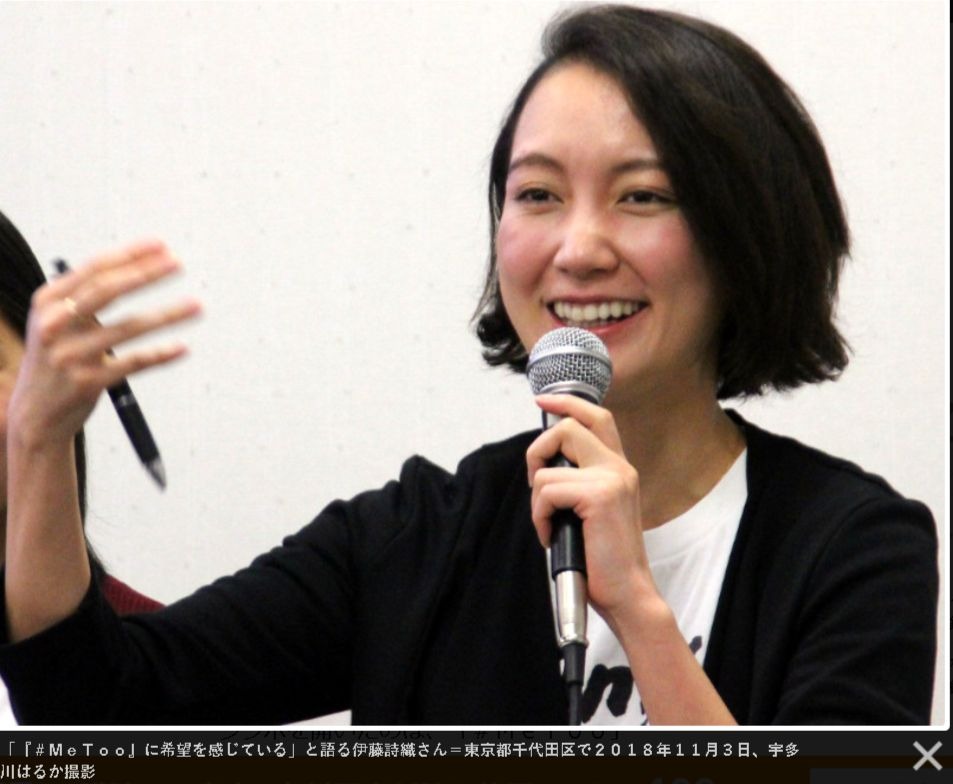 Nov 16: 💛Posted a photo from Makuhari Messe (a convention center) on social media【Tokyo】 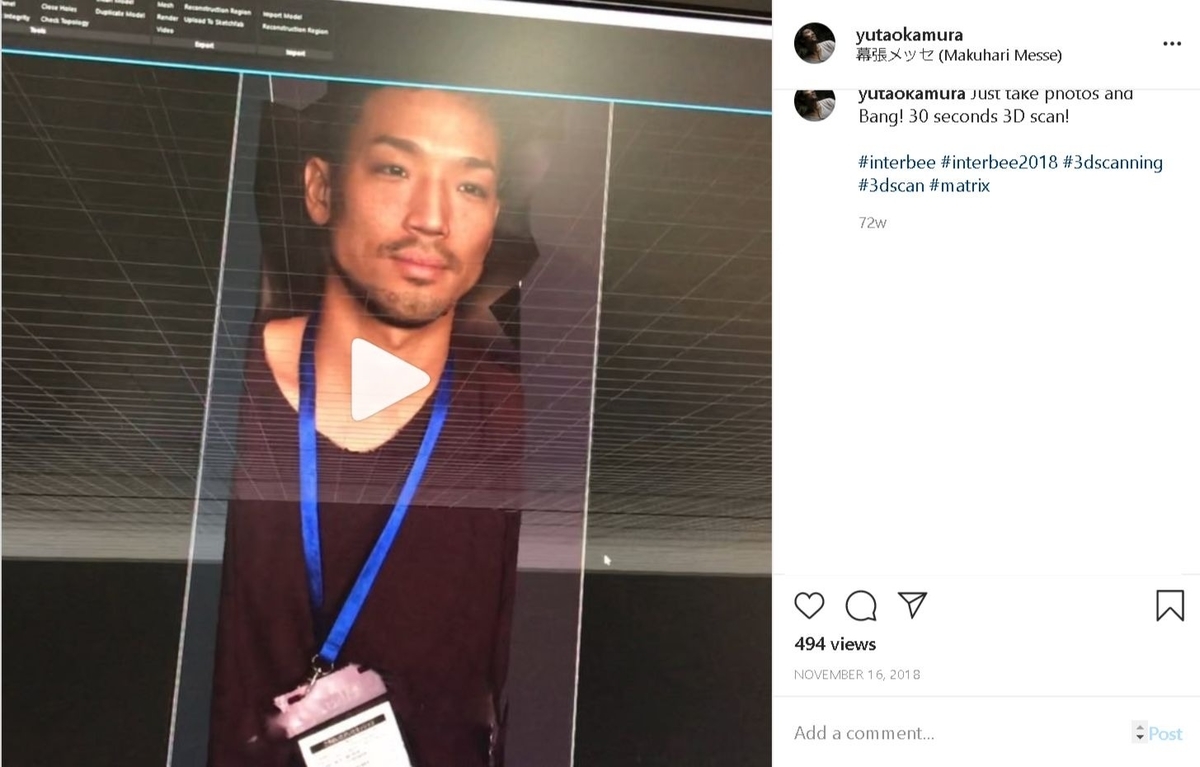 👆To a friend's comment "Are you in Japan?" he replied, "I'm staying in Japan until the end of December." And since then Mr. Okamura hasn't posted any photo on his Instagram.

Dec 05: 🔴Announced about speaking at the European Council on Facebook【Strasbourg, France】 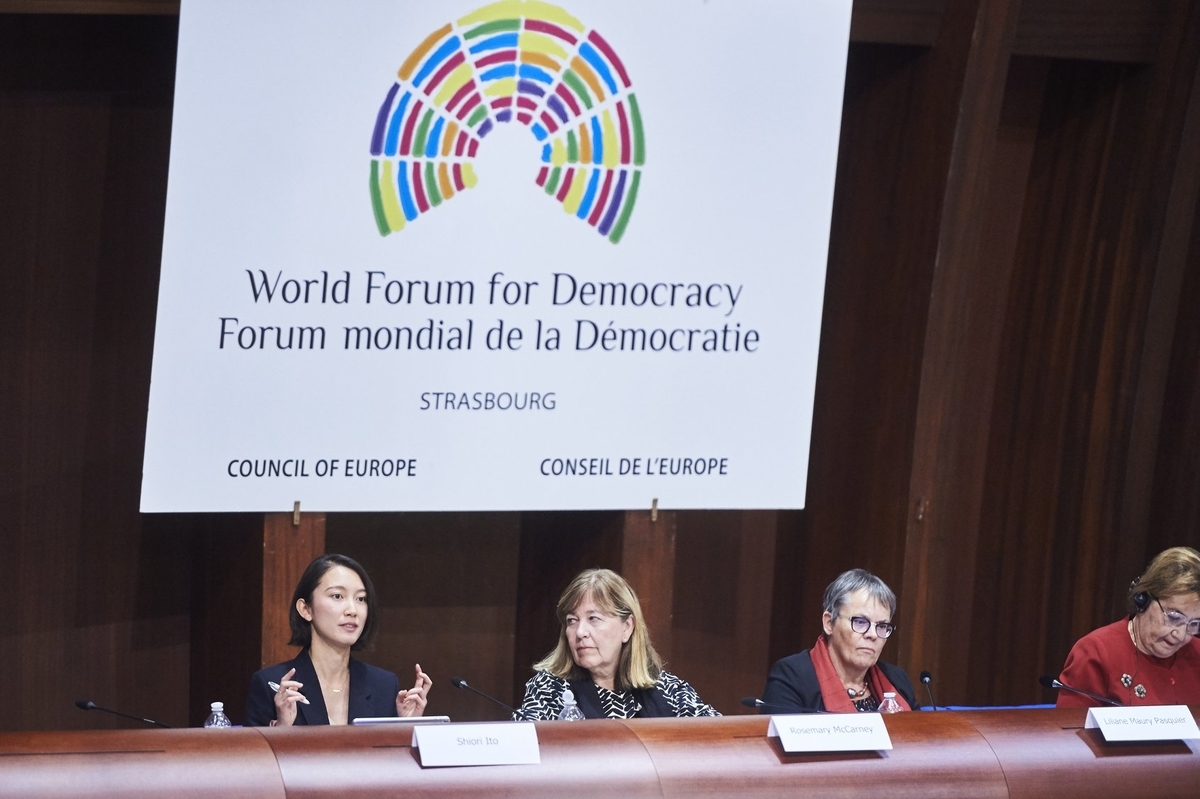 Dec 07: 🔴Shared on Facebook an article of Courrier Japon written by her on the measures against sexual violence in South Korea and Taiwan

🔴Posted on Facebook about Ryuichi Hirokawa of DAYS JAPAN 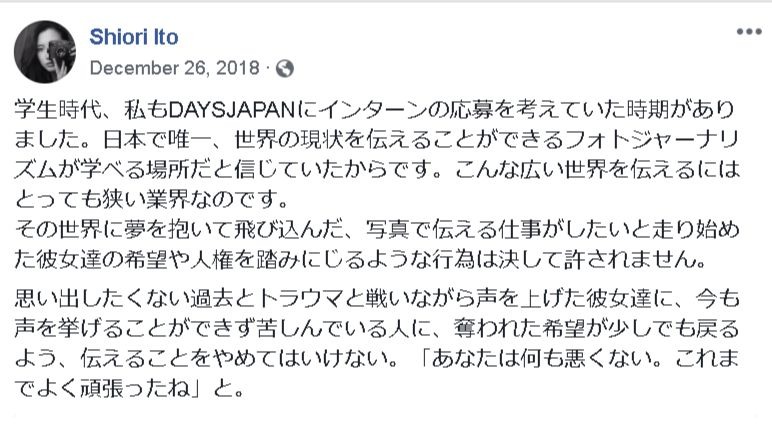 👆When I was a student, there was a time when I was thinking of applying for an intern at DAYS JAPAN. I believed that it was the only place in Japan where I could learn about photojournalism, which could convey the current state of the world. It is a very small industry to convey such a wide world.
Trampling on the hopes and human rights of those women who jumped into the industry with dreams to send messages through photography can never be forgiven.

We shall not stop telling those who raised their voices while fighting trauma and the past that they don't want to remember, to those who are still struggling to raise their voices, so that their hopes that have been robbed may be restored. "You're not bad at all. You've worked hard so far."

Since many of you probably aren't familiar with it, I'll translate the summary of the sexual and power harassment issue of human rights photojournalist "Ryuichi Hirokawa" from Wikipedia.

In December 2018, Weekly Bunshun reported that Mr. Hirokawa was suspected of forcing sexual acts on several women. Mr. Hirokawa calls women into the hotel under the name of "teaching photography" and performed sexual acts with them. Since he has a wide network of contacts with the press, and also he was abusing the staff by unreasonably yelling or swearing in the editorial department, or getting furious by a trivial thing, the victims were placed in a psychological state that "I cannot live in the news industry if I displease him" so they couldn't resist. Mr. Hirokawa denied allegations of those women in the interview with Weekly Bunshun. But after the issue was published, he apologized to the women, and said he was dismissed from the representative director of Days Japan Co. Ltd., an honorary chairman of a certified NPO corporation "Okinawa Kuminosato" after discussion.

In December 2019, Days Japan published a report of a verification committee by experts, saying that there were many cases of compulsory sexual intercourse, naked photography, and intense scolding during the entire period when Mr. Hirokawa ran Days Japan. They recognized the sexual damage, sexual harassment, and power harassment caused by Mr. Hirokawa.

Forced intercourse, multiple victims, daily power harassment, and apology to the victims in the end...these factors show that he is almost certainly a criminal. However, Mr. Hirokawa was not arrested or prosecuted, and he resumed posting on Twitter this April. Only one of the victims has filed a civil suit seeking compensation for the damages.

The strange thing is that the people harshly criticize Mr. Yamaguchi, who has consistently denied the allegation from the beginning and never apologized, saying, "The arrest warrant was canceled by PM Abe's power," "He should be prosecuted. He's a criminal." But they don't say anything about the fact that this probable criminal, Mr. Hirokawa, is walking free.

Ms. Ito wrote in the post on Facebook introduced above, "Trampling on the hopes and human rights of those women can never be forgiven," but after all, she hasn't taken any action not to forgive Mr. Hirokawa. If this is not "hypocrisy," then I don't know what is.

💡I couldn't find the video, only some images of the program. Looking at the images, you can see the NHK filming crew accompanied to "Uncovering Asia" held in South Korea on October 6, and to the "European Council" held in France on December 5. 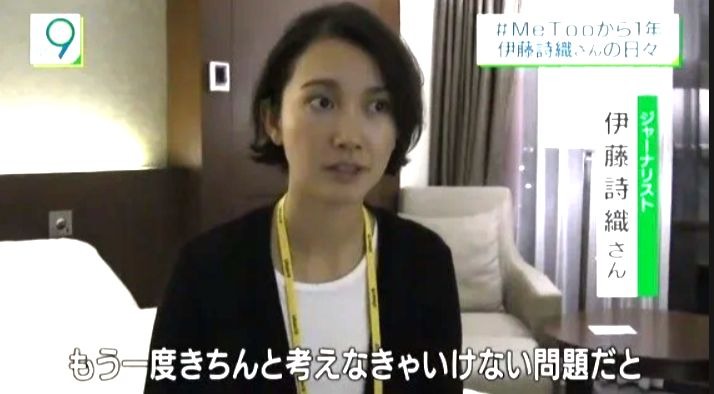 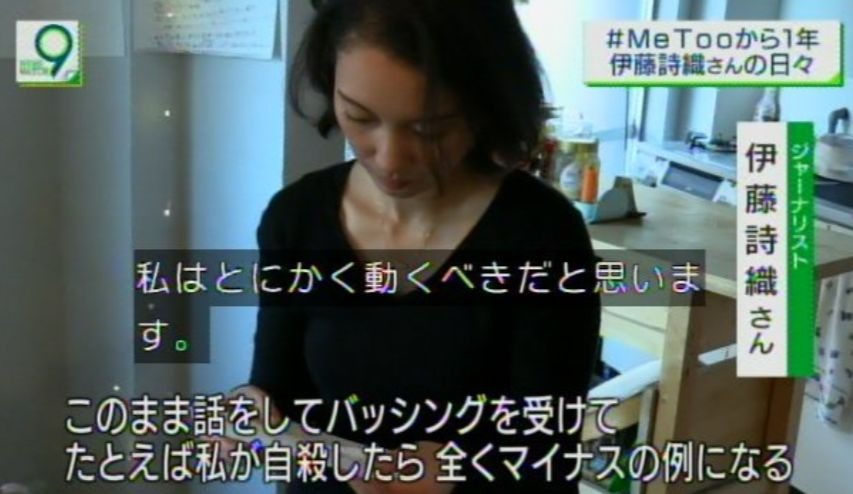 👆Taken at Ms. Ito's home, which was also shown in the BBC documentary. She says in the photo, "In any case, I think I should move. If I continue to speak up and receive backlashes, and if I commit suicide, that'll be a totally bad example." 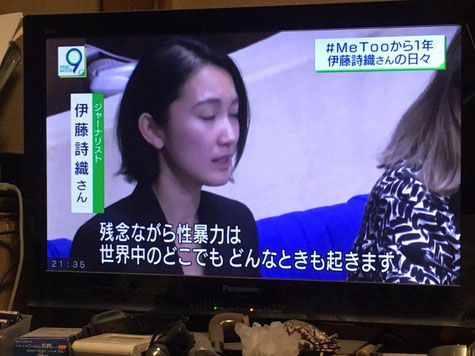 👆The crew accompanied the European Council held in Strasbourg, France on Dec 5. 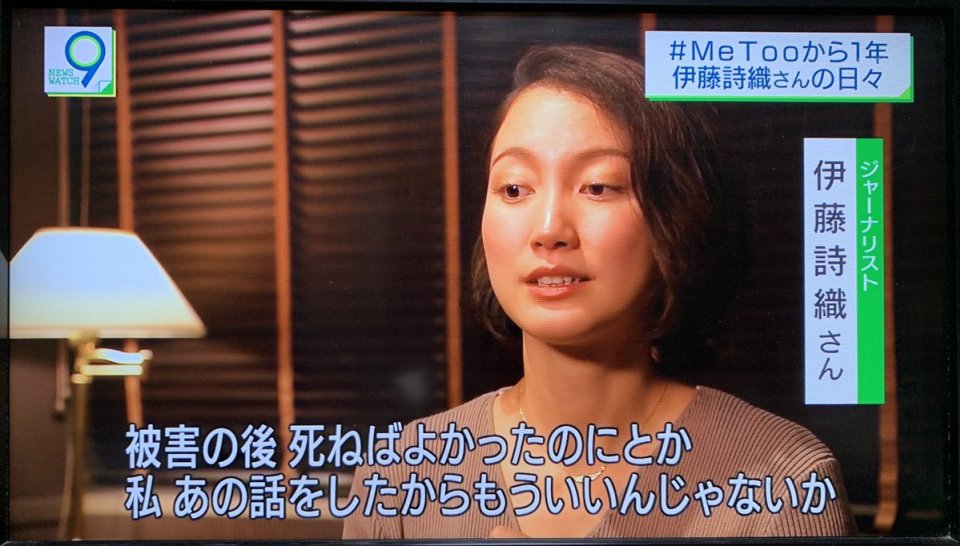 👆Again she mentions suicide here.
Ms. Ito: I thought, "I should have died after the abuse," or "I spoke out about the incident, I did enough."

On the lighter side, this program was nominated for the 2nd Fake News Award on a website called "Free Press Association that protects the right of people to know". It's pretty funny, so you can check it if you're interested (Please use Google translate, it's in Japanese).

In the NHK program above, she said, "if I commit suicide," "I spoke out about the incident, I did enough." However, as we have seen so far, from 2015 when the incident occurred till 2018, Ms. Ito has been vigorously active every year, and frankly, I don't think there was a time for her to be depressed due to the sexual assault and to think about committing suicide.

It wasn't until 2018 that Ms. Ito began to say that she had written a will. The very first mention was in an interview with ELLE in Paris in January 2018, she said, "I wrote a will before the press conference." And then in an interview with GQ magazine in Tokyo in April 2018, she said, "(I wrote) one before the press conference, one after the conference, and one before publishing Black Box." The number of wills has increased to three.

However, in the book "Black Box," there is no mention of writing a will. She says, "before the press conference, I became anxious and decided to cut my hair short because it was falling out due to stress. I even thought of shaving my head." And after the press conference, "I was exposed to criticism on the internet. I fainted and went to the hospital. I couldn't eat solid food for about 10 days, and I wanted to end it as it was." Although there are statements that express a desire for suicide, there's no reference for writing a will at all. She refers to an unstable mental state before the press conference or her desire for suicide after that. If she really wrote a will, she would definitely have mentioned it in the book.

A Habit Paranoia and Exaggeration

In the interview with GQ magazine, Ms. Ito describes the time when she wrote her third will.

I thought they were going to burke (my book's publishing), so I was hiding for a long time, but one time, I really wanted to see the ocean. So I thought I'd go to the closest beach, Yuigahama (in Kamakura). I wrote a will that I would never commit suicide, asking to investigate well if something happens to me. But in the end, I was too scared to go.

There are quite a lot of remarks of Ms. Ito saying, "I thought I would, but I didn't," or "I thought it would be, but it wasn't." For example:

These are only some examples that I could remember quickly. Studying Arabic, or shaving her head, or going to the beach...if she didn't do it in the end, then why did she even mention it from the beginning? Often saying things such as "I thought it would be, but it wasn't," or "I thought I would do it, but I didn't," is a characteristic of a person with strong paranoia, a habit of exaggerating or distorting the stories for their convenient. With that in mind, I think you can understand that you cannot just believe Ms. Ito's remarks. What's written in the "Black Box" is completely unclear which part is true and which part is false or exaggerated.

Looking at the latter half of 2018, you can see Ms. Ito became more and more active internationally after the press conference as a rape victim (although it wasn't prosecuted as a criminal case). On the other hand, Mr. Okamura's individual activities have more and more diminished. In the next post, we will see how Ms. Ito and Mr. Okamura have become "partners" both professionally and privately in chronological order.